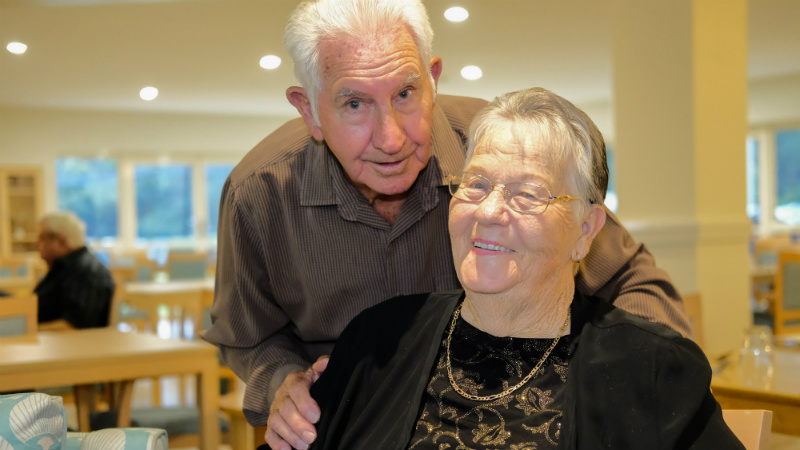 Aveo Peregian Springs Country Club residents Bernie and Gloria met at the young age of 16 when Gloria was celebrating her 16th birthday. Bernie instantly took a fancy. He was friends with Gloria’s brothers and after meeting her, was able to easily use this as an excuse to visit her. Although Gloria had a boyfriend at the time, Bernie was determined to make her fall in love with him. It didn’t take long before the pair started dating. Gloria was, and still is, Bernie’s first and only girlfriend. While Bernie served 3 months in the National Service, Gloria suggested that they ask their parents’ permission to get married. Two years later on February 25th 1956 they were married.

Bernie and Gloria now have 5 children, 12 grandchildren and 11 great grandchildren, with 2 more on the way. They moved from Ipswich to Macleay in 1992 then into Aveo Peregian Springs Country Club in 2008. The couple are celebrating their 10 year anniversary of living at Aveo on February 19th this year and have recently celebrated their 60th diamond wedding anniversary with friends and family at the village. Their love for each other is evident each and every day.

Bring your family and friends along for an Open Day at Aveo Hunters Green on Saturday, 17th April and 11am. It will be a great opportunity to tour the community and discover just how good life is at this vibrant retirement community.

With record-low interest rates, escalating property growth and high buyer demand, the time is right to maximise the sale of your home and move into a retirement community. Visit Aveo Albany Creek on Monday, 19 April at 10:00am to find out more.

With record-low interest rates, escalating property growth and high buyer demand, the time is right to maximise the sale of your home and move into a retirement community. Visit Aveo Aspley Court on Monday, 19 April at 2:00pm to find out more.